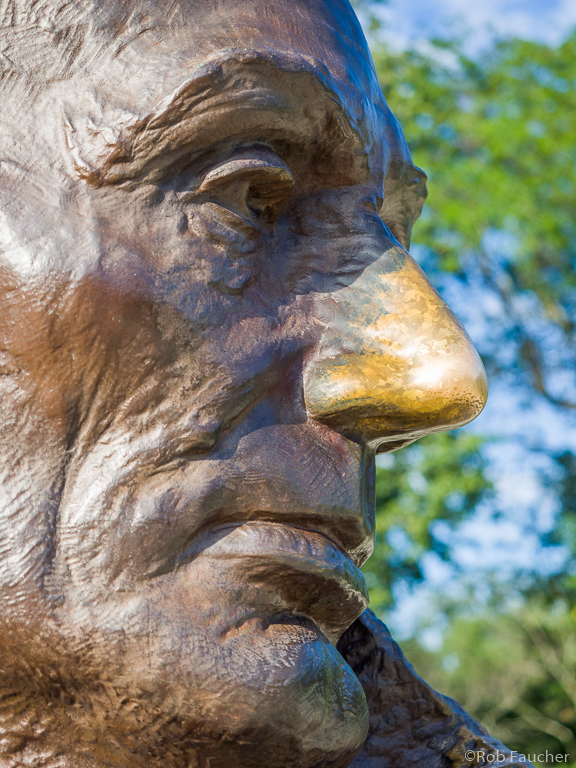 We’re increasingly hearing that democratic politics has been corrupted by manipulators and liars, that old values of justice and truth itself have been sacrificed to corporate greed, ethno-nationalism, or populism. Most of the commentary is directed toward politicians, and most of the commentators themselves are journalists. Their business, so they tell us, is simply to inform us about what’s happening, without bias or the insertion of merely personal opinion. The claims I want to make today are not quite what you hear in the press. The first is about politicians, and it can be summarized briefly: ‘Twas always thus, and nothing we’ve seen in recent years—including in American presidential politics—is unprecedented or surprising. My second claim concerns the lion’s share of today’s political journalism: the self-image of many in this profession as neutral reporter, vetter of facts, and guardian of political truth is not only impossible to believe but is a primary instance—maybe the primary instance—of the post-truth phenomenon. The antics of today’s politicians are largely transparent and about as old as democracy itself. What’s new is nothing the politicians are doing but what’s happening in the daily press.

What’s most intriguing about the post-truth phenomenon isn’t what we hear from journalists but something more insidious and that’s implicit to contemporary media themselves. First, let’s hear from a few of the journalists who are analyzing the phenomenon. No less than three books appeared last year that bear the title Post-Truth, all of which are written by journalists and all of which take a very similar line. James Ball speaks of post-truth as “a catch-all word to cover misrepresentation, half-truths and outrageous lies alike.” Evan Davis notes that the term post-truth arose out of a deep frustration with the political events of 2016 and “came to refer to a number of different things; the liberals’ use of the phrase was obviously fueled by Donald Trump’s election campaign, but that was just a small part of it. In the UK’s EU referendum campaign, both sides were said to have used extreme exaggeration or direct falsehood in order to draw attention to the issues that favoured their side of the argument.” Matthew d’Ancona also remarks that post-truth politics represents “the triumph of the visceral over the rational, the deceptively simple over the honestly complex.” It’s a form of speech in which thoughtful dialogue is replaced by statements that are strategic, often knowingly false, and calculated to capture attention.

By far the main example of the phenomenon each of these authors talks about is rhetoric from politicians. Media spin is mentioned rarely, in passing, and quickly justified on the grounds that news organizations must do this to get attention. Sober reflection does not draw viewers or sell newspapers, and traditional outlets are struggling to compete in the current environment.

There’s a longstanding tendency among reporters to give an appearance of political neutrality. It’s inscribed in their expressions and carefully watched over by editors and producers ever anxious to avoid the dreaded accusation of activism or manipulation. Think of how Fox News is often castigated by their network competitors for conservative partisanship. They’re hardly alone in this. Does anyone imagine that CNN is non-partisan, and countless other news organizations? Why the fig leaf of neutrality? The liberal and conservative press both do this, and the exceptions are few and getting fewer.

What most political journalism today is implicated in is not only advocacy but something more insidious. This is a form of communication in which information, entertainment, advertising, gossip, persuasion, stimulation, and manipulation have become inseparable and which often goes by the name of “perception.” This term when it’s used by the press typically means appearance with a suggestion of falsity. Perceptions can be accurate or inaccurate, but when a journalist says they’re in the perception business they mean that what matters is how things appear (what’s called “optics”) rather than how they are. If you’re clever, you can make just about anything appear any way you wish, and competent journalists fully understand this. It’s they who decide how a public figure will be perceived, where this means both known and judged. The perennial wisdom has long been that it’s suicidal for politicians to criticize the press because the latter always has the last word in the business of public perception and maybe is even entitled to this.

Changes in communication technology have meant that many voters now receive information and ideas from a larger variety of sources than in the days of Walter Cronkite, and traditional news outlets are seeing their hold on the public mind diminishing, a phenomenon that in itself is likely to the good. In response, and ever mindful of their bottom line, traditional news has shaded ever more into entertainment, sensationalism, partisanship, and uncivility on the premise that shouting draws more attention than thinking, as it certainly does. It’s now commonplace, for instance, for some incident, however commonplace, to be deemed newsworthy for the sole reason that it’s accompanied by camera footage that’s visually compelling and preferably shocking. Unparliamentary language from politicians makes headlines while carefully reasoned argumentation is deemed unnewsworthy. Loud protests to the contrary notwithstanding, the primary aim of this business isn’t to inform—not anymore—but to compete for attention amid the general cacophony, and an attention that has been increasingly monetized. Once something is monetized—virtually anything, from information to education and democracy itself—it’s corrupted, made into a means where before it might have been an end in itself. Political journalism is now in this condition, clinging to ideals of old, disingenuously for the most part, while transforming into the opposite.

To describe mainstream political news coverage as “fake” is simplistic. What seems to be taking place isn’t that plain deception has replaced truthfulness but something far more subtle. There’s no need to attribute bad intentions to the great majority of journalists. There’s probably more self-deception at work here than overt lying. Journalists are citizens, political beings whose opinions can’t be bracketed from their reporting. Expecting complete value-neutrality is pointless for the simple reason that it’s impossible to bracket your personal convictions entirely in analyzing or even describing the events of the day. A liberal journalist will not only judge but describe what the government is doing from the standpoint of what a liberal cares about and notices. A conservative will notice other things. The capacity for attention itself is highly selective, and what any of us pays attention to reflects what one believes and cares about. The issue lies in the pretense of objectivity and neutrality. News organizations try to ensure that their coverage is palatable to a general audience. There are exceptions to this, of course, but the more reputable and mainstream television networks and newspapers routinely claim that they have no party line and are beholden to no special interest, and both claims are manifestly untrue. The purpose of most political reporting isn’t to report but to bring the audience around to the journalist’s or their employer’s opinions, as much of their viewership knows, while feigning neutrality. It’s not to provide information or even to do our thinking for us but to provide a substitute for thinking. The point is to stimulate, entertain, bombard, gain and hold attention while mobilizing action.

Putting journalists, however well intentioned they may be, in charge of political truth, as many claim as a kind of right, may be compared to putting a coyote in charge of a hen house. It’s not wise, for the same reason, and we can say this without casting aspersions on coyotes or their motives. They too must eat, and to their credit they appear to do so without a hint of bad faith and without even uttering the word truth. Journalists have a job to do which involves pleasing superiors, courting advertisers, forming perceptions, leading the horse to water, and being selectively accurate. Let’s not overstate matters: they’re not con artists or plain liars, and attributing bad intentions is in most cases out of order. What can be said is that the American election campaign of 2016 saw journalists from nearly all major news organizations practicing a covert—sometimes overt—activism, largely on behalf of a candidate who did not win. The phenomenon is unusual only in its level of transparency. The fig leaf usually stays on.

Political journalism works not by being fake but by being selectively true, and where the principle of selection is whatever is effective in bringing an audience into a particular state of belief and, better, emotion, one that’s likely to mobilize action in whatever direction is desired. It’s a seduction and a manipulation that doesn’t know itself as such since the lie it tells is both a partial presentation of the truth and an example of bad faith—the lie one tells to oneself—far more than simple deception. It’s mendacity with a clear conscience, a crusader in its mind for what is good and true, and that usually imagines it’s resisting an enemy.

In case any journalist, or anyone else, suspects me of being a Trump supporter given the line of critique I have advanced, let me declare on the record that I am not now, nor have I ever been, a member of the Republican Party, the “alt right,” or a supporter of the current American president. Being Canadian, I don’t get a vote in American elections, am pleased to be living in the land of Trudeau (even if The Younger), and have come to regard political extremes of all kinds as about equally dangerous. My suggestion is that we speak slowly, if at all, of political truth. If it exists, I suspect we’ll find it only in a democratic discourse that is negotiated, agonistic but civil, at times imaginative, and always inseparable from “perception” and the will to power. It is not a rationalist’s tea party. From its ancient inception, democracy in its numerous forms has always had a shadow. A politics that holds out a promise of equal freedom invariably includes no little sophistry, alienation, resentment, and self-seeking, and has from the beginning.

Understanding democracy requires grasping together two ideas that are contradictory in principle and inseparable in practice, the struggle between which is fundamental to our form of democracy and every other: truth and untruth, rationality and irrationality existing side by side. Struggle is of the essence of politics, and democratic politicians from the best to the worst have always been strategically oriented far more than they are truth seekers. The same is now true of the great majority of political journalists.