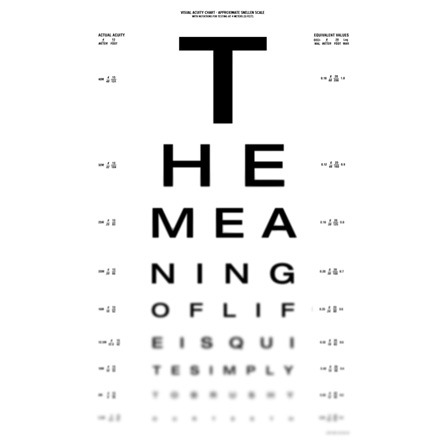 One of the questions that first attracted me to philosophy when I was a teenager is the perennial problem of the meaning of life. The search for meaning drove me to read widely in academic and popular philosophy, psychology, religion, and literature, and was implicit also to a great deal of the music I was listening to. The meaning of life is one of those monumental questions that we often think too big to answer. Professional philosophers often think the question naïve, a sort of counterpart to the Holy Grail. When you go to the philosophy section of any popular bookstore, on the other hand, you see any number of books with titles that promise some kind of answer to this. What is it about this question that’s so elusive? As a rule, when any question like this remains unanswered for centuries, there’s a fair likelihood that there’s a problem with the question itself. It may contain a false assumption or two which, once removed, might then make it possible to ask a new question which in turn might allow us to make some headway. I’m going to suggest that is the case here.

The question, what is the meaning of life, at least as we often understand this, seems to me to assume a few things which might look innocuous but which I suspect are the source of the difficulty. I’m going to suggest this question, again as we usually pose it, contains four very questionable assumptions. One could write a book about each of the four, but I’ll keep this short. The assumptions are: (1) that the meaning of human life is one; (2) that such a meaning is determinate; (3) that it’s in some way objective; and (4) that a meaningful life is more or less the same as a happy one. “The meaning of life” is not going to be resolved in any definitive way, but if we lose these four assumptions and alter the question, I do think it’s possible to get a bit of a handle on this.

Let’s have a closer look at that first assumption: that the meaning of human life is singular. The question asks about the meaning, not the meanings—why is this? Why would we suppose any such meaning to be singular? This is largely a consequence of 3000 years of western monotheism which has cultivated our taste for the unconditional and the absolute. When fundamental questions of human existence are at stake, the ancient problem of the one and the many tends to be resolved in favor of the one: one deity and one big meaning of life which reflects our hoped-for relation to that deity and maybe a hoped-for afterlife. For a couple of millennia now, religious believers have been reassured that their place in the world and the meaning of their personal existence are known. The ultimate significance of life is the same for everyone, which in short is to live by the word of God. Today, while many who ask about the meaning of life are unsatisfied with this answer, their taste for the absolute often remains and one is sent looking for some new absolute to fill the void. That quest has no solution. If you’re a monotheist, the quest for one big meaning might pan out; if you’re not, it likely won’t.

The second difficulty has to do with the little word “is”: what “is” the meaning? Most often, when we say that something “is,” we mean that it is determinate; it is what it is. We might not know what it is, but whatever it is, it is that. I’m going to suggest that humanly significant meaning isn’t like that. It’s indeterminate, meaning there’s a certain inexhaustibility to the matter. It always means more than we know and more than we could ever say about it. To say that the meaning of something is indeterminate isn’t to say it doesn’t exist but that its being is still in process of being determined, maybe permanently. Its being is a “may be” or a “perhaps.” It’s something we venture and decide—not as a wild stab in the dark but in the manner of a high-stakes gamble.

The third assumption that’s commonly made is that the meaning of a human life is something objective, in contrast with the subjective. The distinction between the objective and the subjective is both ambiguous and highly problematic, but simplifying considerably what I mean by “subjective” is what is the case “for me” or for someone or other while what is objectively true is simply true. “2 + 2 = 4” isn’t true for me; it’s true period, objectively. What is subjective is ultimately about the subject while what is objective is about the object. I want to say that the meaning of life is nothing objective at all but is in every case subjective. If I were speaking more strictly, I’d say that the dichotomy of objective versus subjective is false, but for brevity’s sake I’ll say that any meaning that belongs to a human life is closer to a personal invention that an objective discovery. It always has a “for me” or “for us” quality and is closer to an invention or a decision—something I need to do for myself—than something that simply is the case and the truth of which I could possibly discover.

The fourth point is about the very ambiguous relation between a meaningful life and a happy one. There are many instances of people living lives that are rich in significance but who are not necessarily the happiest of people. These are two distinct matters, which are often closely related but not always. Much also depends on what we mean by happiness, which itself is a long story. For an early modern materialist philosopher like Thomas Hobbes, happiness is defined very simply as pleasure and the absence of pain, and his influence not only upon later generations of social contractarians and utilitarians but upon modern culture generally has been and continues to be profound. I’m suggesting we drop the assumption that a meaningful life and a happy one are one and the same. There are happy lives—at least on Hobbes’ definition of the word and some others—that I would hesitate to describe as rich in meaning and unhappy lives that we can well describe that way. A psychologist might (I emphasize the conditional because I’m very skeptical of this) be able to tell us what (sometimes) makes for a happy life, but not likely a meaningful one—the reason being that meaning isn’t a scientific category but a cultural, existential, and moral one. Existential psychology can and often has managed to bridge this divide with some success, but don’t expect this from psychology in either its popular or more ostensibly scientific forms.

On my reading of the times, there’s a widespread existential vacuity in western culture today, a sense that there’s something missing in people’s lives, a personal significance and purposiveness that is frustratingly elusive. Human beings live by meanings. We are thinking beings who operate with some basic understanding of a few things: what the world is like, who we are, how things are done, what is good, and what things mean. Every culture and time period of which we know has had some fundamental orientation or worldview that has given the individual a sense of where they stand and what matters, yet ours finds the same existential vacuum that Nietzsche was writing about a century and a half ago not only visible beneath the surface of modern life but, in my view, ever more so. There’s a frantic search for something that’s eluding us, a grasping for straws that animates a great deal of our culture and everything that is downstream from culture such as our politics. Human beings need a sense of purpose, and it doesn’t need to be one big purpose, or the same for everyone, or determinate or objective. It can be small, variable, multifarious, yours alone, or several in number. We don’t need to think big here. We can get our bearings from the small, or smaller, the contingent and the many. The various things that we do, the decisions we make, all those elective affinities that we make our own—all of it matters, or matters to you. No less important than what you choose and do is the matter of who is doing the choosing. The individual must do this for him- or herself, and whether one opts to put all one’s eggs in one basket or diversify one’s portfolio is not a question of correct or incorrect but of what sits well with you and what you can live with. Much of this is instinctive, as much a matter of passion as reason, although reason shouldn’t be put aside when we’re speaking of whatever it is that we organize our lives around. Life is a willing and a venturing, a high-stakes rolling of the dice and an acceptance of the consequences.