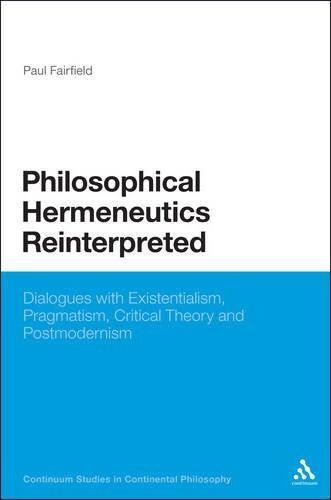 In this important new study, Paul Fairfield examines a number of issues of central importance to philosophical hermeneutics. His aim is less to reexamine the basic hypotheses of hermeneutics (Gadamer’s hermeneutics in particular) than to understand it in relational terms, by bringing it into closer association with existentialism, pragmatism, critical theory, and postmodernism. Fairfield contends that there are important affinities and areas for critical exchange between hermeneutics and these four schools of thought which have, until now, remained underappreciated.

Philosophical Hermeneutics Reinterpreted examines several of these connections by interpreting hermeneutics in relation to specific themes in the writings of key figures within each of these traditions. In so doing, he both clarifies some outstanding issues in hermeneutics and advances the subject beyond what Heidegger, Gadamer, and Ricoeur have given us.